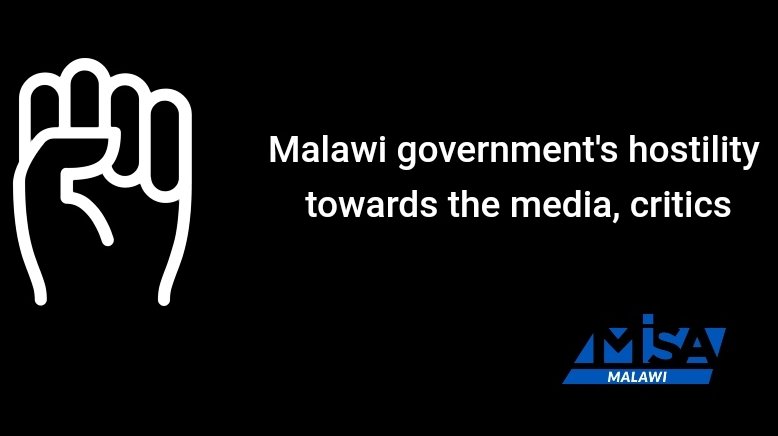 7 Apr, 2022
Malawi's Constitution guarantees civil rights and liberties to everyone.

MISA Malawi is deeply concerned with government’s increased hostility towards the media and critics.

It is even more worrying that members of the Cabinet whose duties include upholding the Constitution are in the forefront violating constitutional  provisions they are meant to protect.

On Wednesday, April 6, 2022, Minister of Energy Honourable Ibrahim Matola verbally attacked Malawi Institute of Journalism (MIJ) FM reporter Cathy Maulidi during Government Faces the Press. The Minister accused Maulidi of being an agent of the opposition for simply asking question on government’s plan on fuel prices.

On March 23, 2022, Minister of Finance and Economic Affairs Honourable Sosten Gwengwe also threatened to walk out of an interview over a similar question and insinuated that someone had sent Maulidi to ask him questions.

These and several other cases of media censorship, online and offline attacks on journalists and critical voices are suppressing media freedom, freedom of speech and other legitimate forms of dissent which is very sad for our democracy.

The media and critics exist to ensure that Malawians are getting information about their government and ensure that there is transparency and accountability in the implementation of government plans, policies and development programs.

The media and critical voices are not enemies of the State or government. Ministers and other government officials are supposed to be accountable to the people and it is not wrong to ask them questions.

MISA Malawi would like to remind the ruling elite and their supporters of the following:

2) Section 34 of the Malawi Constitution states that “Every person shall have the right to freedom of opinion, including the right to hold opinions without interference to hold, receive and impart opinions.”

3) Section 35 states that “Every person shall have the right to freedom of expression.”

4) Section 36 reads, “The press shall have the right to report and publish freely, within Malawi and abroad, and to be accorded the fullest possible facilities for access to public information.

5) Section 37 says, “…Every person shall have the right of access to all information held by the State or any of its organs at any level of Government in so far as such information is required for the exercise of his right.”

6) And section 38 states that “Every person shall have the right to assemble and demonstrate with others peacefully and unarmed.”

Therefore, any acts of using the State machinery, including police, and the ruling elite supporters to intimidate and attack the media and critics are not in line with our Constitution which rightly guarantees civil rights and liberties to everyone.

Reporters Without Boundaries has released the 2022 World Press Freedom Index, which points to worrying signs for freedom of expression in Southern Africa, with a number of countries recording sharp declines. Botswana, long regarded as a bastion of democracy, saw a...