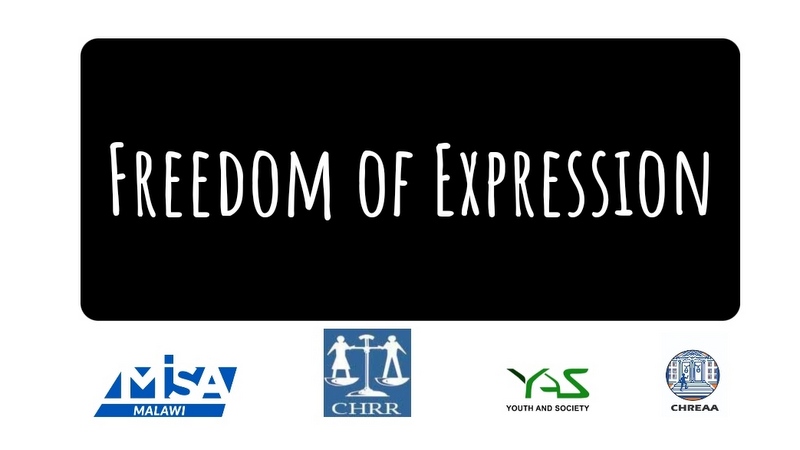 13 Mar, 2022
We call upon the Tonse administration to restore the country’s fading glory by upholding freedom of expression.

The undersigned organisations share the concerns raised by Catholic Bishops in their pastoral letter regarding the exercise of freedom of expression in Malawi. In their pastoral letter commemorating the 30th Anniversary of ‘Living Our Faith’, the bishops note that “dissenting voices in our society are muted through the application of archaic and draconian laws”, saying this is not in tandem with the current multiparty democracy which guarantees freedom of expression even when it is critical of government policies and actions.

As organisations that are committed to ensuring full respect for fundamental freedoms enshrined in our constitution, we share the bishops’ concerns and call upon the Tonse administration to uphold freedom of expression in full respect of the constitution of Malawi as well as international norms and human rights obligations.

• Section 4 of the Protected Flag, Emblems and Names Act (Cap. 18:03), which makes it an offence to “do any act or utter any words or publish or utter any writing calculated to insult, ridicule or to show disrespect” to the President, the national flag, armorial ensigns, the public seal or any other protected emblem or likeness.

• Section 200 of the Penal Code, which states that “Any person who, by print, writing, painting, effigy, or by any means otherwise than solely by gestures, spoken words, or other sounds, unlawfully publishes any defamatory matter concerning another person, with intent to defame that other person, shall be guilty of the misdemeanour termed “libel”.

• Preservation of Public Security Act (Cap 14:02), Regulation 5 made under section 3 of the Act, which makes it a crime for any person to publish any matter which is likely to be “prejudicial to public security; undermine the authority of, or the public confidence in, the government; promote feelings of ill-will or hostility between any sections of classes or races of inhabitants of Malawi; or promote industrial unrest in Malawi.

• Section 182 of the Penal Code (Cap 7:01), which prohibits the use of insulting language in a manner likely to provoke another person to breach the peace or to commit any offence against the person.

• The Electronic Transactions and Cybersecurity Act of 2016, which provides for restrictions on online communications and penalises “offensive communication” via ICTs with penalties of fines or a maximum 12-month prison sentence. Such laws have the effect of instilling a sense of self-censorship, where citizens are unable to express themselves freely. Over the years, Governments have used these laws to restrict freedom of expression, especially for those with dissenting views. Our organisations have documented several cases of people arrested simply for expressing their views. More recently, freedom of expression has come under attack by authorities clamping down on social media users and activists. Currently, there are a number of individuals who are answering various criminal charges related to freedom of expression in our courts. Some of the recent cases include the following:

• In January this year, Police arrested social media activist, Joshua Chisa Mbele, after he posted on his facebook page an unauthenticated
document with names of top government officials allegedly implicated in corruption.

• Around the same time, in January this year, Police issued a warrant of arrest for political activist, Bon Kalindo, for allegedly insulting President Lazarus Chakwera. The warrant was later withdrawn after public outcry.

• The Police also arrested 20-year-old Chisomo Makala, who is believed to have shared on social media a video clip that appeared to ridicule
President Lazarus Chakwera. Makala has since been released on bail. She was arrested in Chigwirizano Township after police traced a phone number that she had used to share the video clip on a WhatsApp group called Mandota Comedy.

• In August 2021, Police arrested activist, Sylvester Namiwa, for attempting to stage a demonstration at Parliament Building over the sneaked loan authorisation bill.

• In May 2021, Police arrested Ignatius Kamwanje over a Facebook post in which he alleged that money was being stolen from customers’ accounts at National Bank of Malawi (NBM). Kamwanje was later convicted and sentenced to 18 months’ imprisonment with the alternative to pay a fine by the Lilongwe chief resident magistrate’s court.

• In April 2021, the Police arrested journalist Watipaso Mzungu over a story published on Nyasatimes critical of President Chakwera. Around the same time, Police also arrested a Joy Radio journalist, Enock Balakasi, for taking pictures during an incident in Kawale Township where Police officers were trying to bring order after a resident tried to commit suicide.

• In April 2019, Police arrested Tumpale Mwakibinga after he posted on his Facebook page a picture likening former first Lady Gertrude Mutharika to cartoon character Rango. He was charged with insulting the modesty of a woman, and cyber violation under the Electronic Transaction and Cyber Security Act.

We remind authorities that Malawi is a democratic country. In a democracy, noone should be afraid to express their views. Freedom of speech, or freedom of expression, applies to ideas of all kinds, including those that may be deeply offensive. The only restrictions that are permissible are those that are prescribed by law, which are reasonable, recognized by international human rights standards and necessary in an open and democratic society, according to section 44(1) of the Constitution of the Republic of Malawi.

We further urge the Tonse administration to drop all court cases related to freedom of expression. It is quite distressing to note that Malawi continues to cling to these archaic and draconian laws when other countries have removed them. We note, for instance, that in June 2014, the Zimbabwe Constitutional Court declared the offense of criminal defamation as unconstitutional and inconsistent with the protection of freedom of expression under the country’s Constitution.

Internationally, Malawi has been hailed as a shining example of countries that respect principles of democracy and human rights. However, the recent increase in arrests of people on charges related to freedom of expression gives a worrying indication that the country is slowly retrogressing.