Gains and losses for Media Freedom, ATI under the Tonse Administration 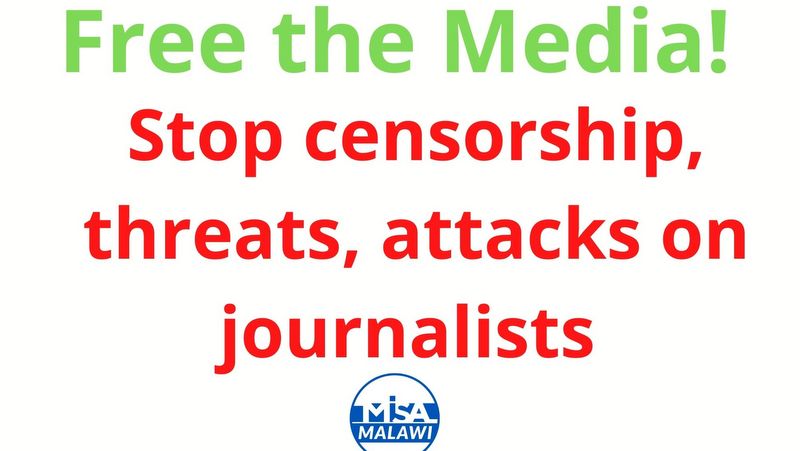 1 Jan, 2021
Tonse administration and its supporters have taken actions aimed at reducing media space and freedoms.

The six months’ journey under the Tonse Alliance administration has registered both gains worth celebrating and trends that MISA Malawi is deeply worried about.

As we close the year 2020, we applaud the administration for having operationalized the Access to Information law, whose advocacy work last for as long as 17 years. The operationalization in September, barely three months after the Tonse Administration took office is highly commendable and government should build on this to finalize the process to gazette the ATI regulations.

We would also like to applaud the new administration for opening up the state house and introducing the weekly press briefings which we believe have allowed the media more access to the highest office in the country as well as fulfilling the proactive disclosure requirement under the ATI regime.

But while we celebrate these milestones, MISA Malawi is concerned that the administration and its supporters have, in this very short time, taken actions that are aimed at reducing media space and freedoms.

In our ongoing media monitoring project, we have sadly recorded the following media violations:

1. Cyberbullying of Nation Publications Limited (NPL) journalists Suzgo Chitete and Ephraim Munthali following a story by the newspaper on EU’s budget support to Malawi and Munthali’s opinions in his weekly column ‘Cut the Chaff’ which appears in the Weekend Nation. The attackers, who have not hidden the fact that they are supporters of the Tonse Alliance Administration, have cowardly launched their onslaught of the journalists under pseudo Facebook accounts. Some MCP insiders have been writing Chitete to warn him of what was being planned against him for writing articles deemed critical of the administration.

2. Some cabinet ministers have also been calling and threatening journalists after publication of stories deemed to be critical of the Tonse Alliance Administration.

3. The recent closure of privately-owned Galaxy FM by the Lilongwe City Council (LCC) reportedly over unsettled city rates is worrying especially as some defaulters are spared. MISA Malawi does not condone default on city rates, but the best approach was to engage the management of Galaxy FM and resolve the issue through mutual business negotiations.

4. Prior approval by state house of questions for the weekly press briefings is uncalled for. While this may have been done to allow for preparations by those who would respond, we have reports that questions considered ‘critical’ are removed, thus turning the weekly briefings into public relations functions and not a two-way platform of engagement between the media and the presidency. On the same note, it is worrying that some journalists and media houses have been struggling to access the briefings.

As we close the year, we would like to urge the Tonse Alliance Administration to build on the gains and correct the wrongs. Malawians voted the new administration into office on trust that it would deliver on its promises, including being more tolerant to the critical voices, empowering citizens with information with which they can use to hold power to account and championing media freedom.

2021 grants the Tonse Administration another chance to demonstrate that the campaign rhetoric is to be translated to demonstrable action.

We would like to reiterate that the media is not immune to criticism, but that it should be done in the appropriate manner. The Media Council of Malawi is available to handle all concerns on the media and ensure that these are resolved without bruising the relationship that exists between the media, government and citizens.

We also urge the leadership to thrive to inspire co-existence amongst people with different opinions so that supporters of the administration do not wield power to victimize those presumed to be without that same power.

MISA Malawi again applauds the government for the gains registered in the media sector this far and we look forward with hope that 2021 will see media freedom being safeguarded and free of attacks on journalists.